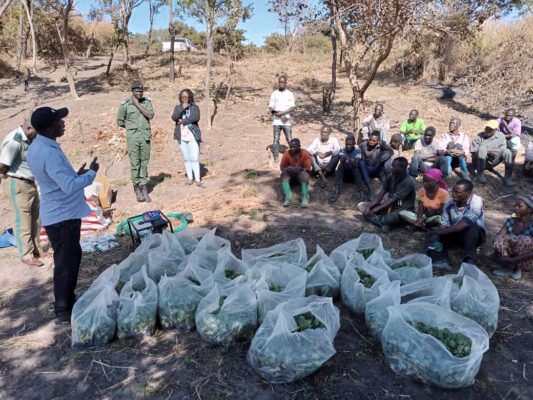 The Zambia Correctional Service (ZCS) has continued to make strides in the rehabilitation of Inmates. The paradigm shift which necessitated the name change has enhanced the focus of the Service on the rehabilitation and reintegration of inmates through survival skills.

The realization of the effect of survival skills on the life of inmates has made it possible for the Service to engage in a number of projects that aim at empowering them to be self –reliant and better citizens after serving their sentences.

ZCS top command has resolved to achieve at least 25% of inmates attending skill training course and education programmes in all facilities.

Since time immemorial, countries world over have used punitive model as punishment for offenders. However, research has revealed that punitive or retributive model does not reform the inmate but instead hardens them. This has steered countries shifting from punitive model to correctional model whose aim is to reform other than to punish the offender.

It is in this vein, that a number of Non-Governmental Organizations (NGOs) working in collaboration with ZCS have come up with a number of initiatives which focus on reformation and reintegration of inmates.

Inmates are now encouraged to pursue their education and are also imparted with different survival skills such as General Agriculture, Carpentry, Brick laying, Electrical etc.

In the last three years, a number of NGOs among them Voluntary Service Overseas (VSO) in partnership with Chreso Ministries and Celim Zambia and in partnership with Prisoners Future Foundation (PFF) and the Prisoners Reintegration Empowerment Organization (The Agency) have been implementing the European Union funded Zambian Inmates Skills Training for Successful Reintegration (ZISSR) project and the Abilitation and reintegration of offenders for a sustainable growth projects.

The Project, Abilitation and reintegration for a sustainable growth was aimed at securing a peaceful, just and inclusive society through formal education, legal aid, life skills and start up packs among others upon discharge from the facility.

Prisoners Future Foundation was implementing this project which commenced in January 2019 and came to an end on January 14, 2022.

In an interview, Prisoners Future Foundation (PFF) Executive Director Geoffrey Mayamba explained that in the last three years of the project, a number of activities have been conducted in selected correctional facilities.

Mr. Mayamba explained that apart from the common education and survival skills such as carpentry, brick laying, metal fabrication and power electrical, the organization offered entrepreneurship and job search to inmates.

Mr. Mayamba narrated that in education the organisation supported inmates’ through the procurement of learning material, lobbying for government teachers from District Education Board (DEBs) for Mongu correctional facility.

Further, he catalogued the payment of TEVETA, grade nine and twelve examination fees, building of a 1x 2 classroom at each facility, procurement of tools/equipment for skills development and computers as some of the project achievements.

“We also paid for Mumbwa and Mongu correctional facilities as TEVETA Trades Training Centres,” he said “this would make it easy for inmates, officers and surrounding community members sit for trade exams.”

Mr. Mayamba added that for Mongu Correctional facility his organisation helped with laboratory equipment to enable learners’ participate in science related subjects and equipped the ICT lab with computers.

He added that to ensure continuity of the project the organisation supported the facilities in income generating activities that would help in project sustenance. Mr. Mayamba hoped that this would be achieved and the project extended to other facilities.

He however, lamented that stigma and the legal framework does not seem to favour the ex-inmates. Mr. Mayamba said it was for the reason that the organisation brought in different professionals at a symposium held on January 7th 2022 to help them understand provisions that speaks to the reintegration of inmates.

He said the organisation would soon be submitting a paper to government to help address the current loop holes pertaining to the reintegration of inmates.

ZISSR is a 3-year project that started in 2019 and with the good will of the EU is scheduled to close this year in April.

The ZISSR was drawn as an intervention that would help break the circle of recidivism in the 4 targeted correctional facilities and the country at large through scaling of the intervention upscaling of intervention.

Mr. Mutale says the project includes provision of technical vocational entrepreneurial and training for the economic empowerment of the ex-inmates.

he side so far ,492binmtaes have been imparted with survival skills and certified by TEVETA, while 412 have been trained in short courses, such as tie -and -dye ,meat smoking and tile fixing by Chreso Ministries.

He expressed hope that the inmates imparted with various skills would turn out to be role models and become productive members of the community once released from the facilities.

42-year Rossah Nambala, an ex-inmate who is pursuing a course in Power Electrical, said she continues to pursue her skill development after being discharged from Mazabuka Correctional Centre.

“I had an opportunity to choose a trade of my choice while in prison and I chose Power Electrical because it was easy for me,” she said in an interview.

Danny Munyepi of Mawilo in Nkeyema district is another ex-inmate who is now a farmer growing tobacco cabbage and onions.

Mr Munyepi was empowered with farming skills through the “Habilitation and Reintegration of offenders for sustainable Growth” project, which is being implemented by Celim Zambia and PFF while he was serving his sentence at Kaoma Correctional Centre.

Mr. Mumbuwa, who is also ZCS assistant commissioner, appealed to the project funders for their continued support.